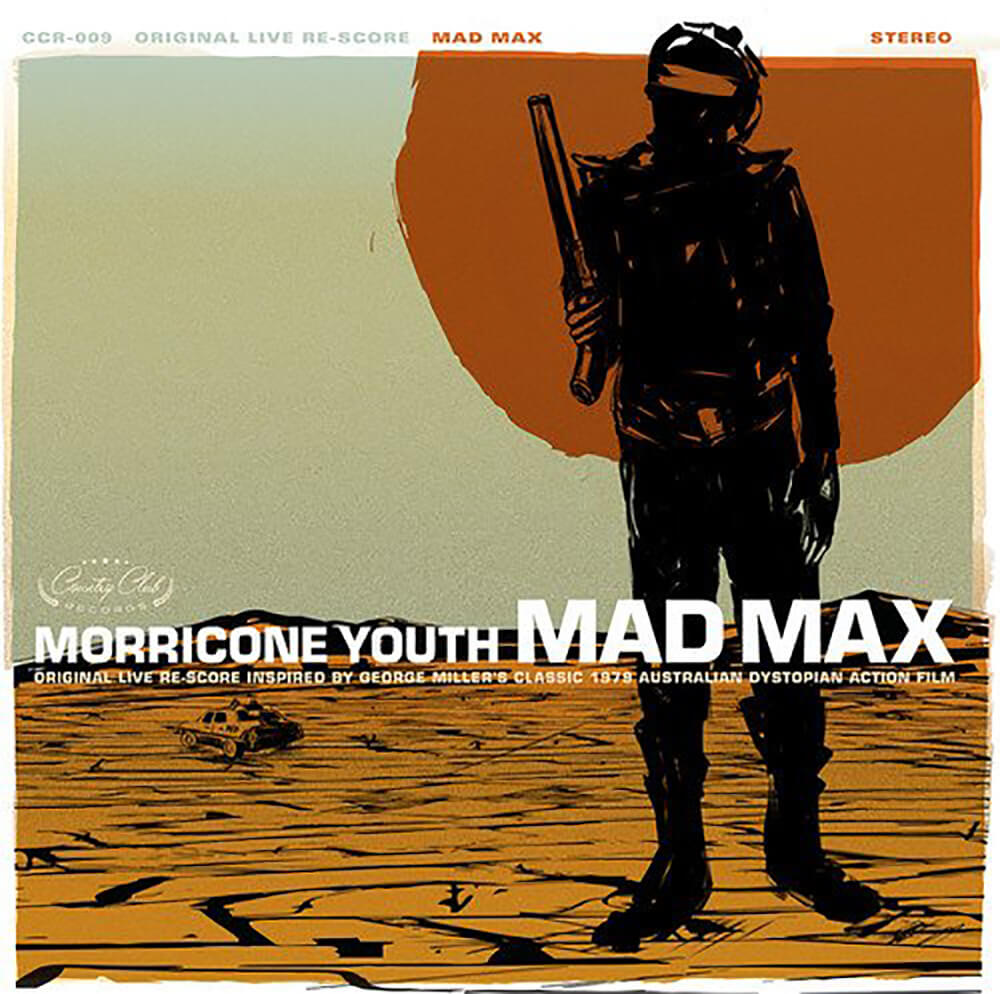 Morricone Youth is an odd music collective no matter which way you look at them. Formed in Brooklyn and having been performing together since 1999, the group focuses mainly on writing soundtracks for already existing silent and midnight movies. A total of 15 have been done so far, includeingEraserhead, The Battleship Potemkin, Enter the Dragon, Foxy Brown, the original Nosferatu, Fantastic Planet, The Lodger: A Story of the London Fog, Night of the Living Dead, and the work I’ll be reviewing here, the original 1979 Mad Max.

How Morricone Youth’s shows usually work is the movie the soundtrack’s for will play, without sound of course, as the band plays their music over it instead. The only image I could find of the band playing live, one in granulated black and white, had the members in the frame wearing Michael Myers type masks. Now, aside from playing live, Morricone Youth is recording all the soundtracks they’ve composed so far, with Mad Max being their latest release.

The first thing you need to get out of your mind, and I reiterate, is no, this is not a direct recreation of the original Mad Max score. This is their own interpretation based on their varying styles. I myself have only seen this film once, so my knowledge of events the music is supposed to correspond to is limited.

The opening number, “Halls of Justice,” begins with a somber violin with electronic bleeps and blorps, along with distorted vocals where the only lines I could make out for sure had to do with the Interceptor, Max’s car. So when it flows into “Mad Goose,” after another synth buildup, the chase from the beginning of the movie is in full swing, complimented with surf guitar and clanking keyboards. You certainly feel like you’ve been taken along for a ride.

Much like a soundtrack should do, it weaves in and out with your emotions. “Clunes Town,” “Jessie,” and “Johnny the Boy” are supposed to the down points, where the audience is meant to catch their breath and catch up with the side characters, like Max’s wife and child. There are also bits of cheesy saxophone and trumpet in there to make this feel authentically from the late 70’s, early 80’s (though not as cheesy as in “Beyond Thunderdome”). Meanwhile, tracks like “Revenge of the MFP,” “Nightrider,” and “Toecutter,” are downright villain songs. Which makes sense since they’re named after the various villains in the movie, with loud blaring instruments and melodies filled with tragedy, mayhem, and the urge to fight the nearest person to you.

When the last song, “Bad Max (End Credits)” finally comes around, with a general melancholy sound from all the instruments, you feel as worn out as Max at this point, where he finally gets his revenge and leaves civilization behind for the outback. You feel just as worn out as Max at this point, longing for peace. If this album taught me anything, it’s that I should really re-watch the Mad Max movies. I remember enjoying all of them and I haven’t gone back to them since I saw Fury Road in theaters. Then I can determine for myself if this music actually does fit the parts they’re supposed to.