Phish Layers the Garden with Jimmies

On the second Sunday of the outstanding Baker’s Dozen run at Madison Square Garden, Phish once again left its mark in the building and reminded us why we should never miss a Sunday show.  When they opened with the classic, “The Curtain With,” the audience knew that they were in for an extra tasty treat.  On Night 8, the band showed patience, confidence, and, of course – a sense of humor.  Launching into a short but sweet first set “Runaway Jim” the band brought smiles to faces as the first donut reference of the night was revealed. Phish has magically decorated all their sets with delicious toppings during the Baker’s Dozen, and they continue to please the crowd with the lyrics we know and love. 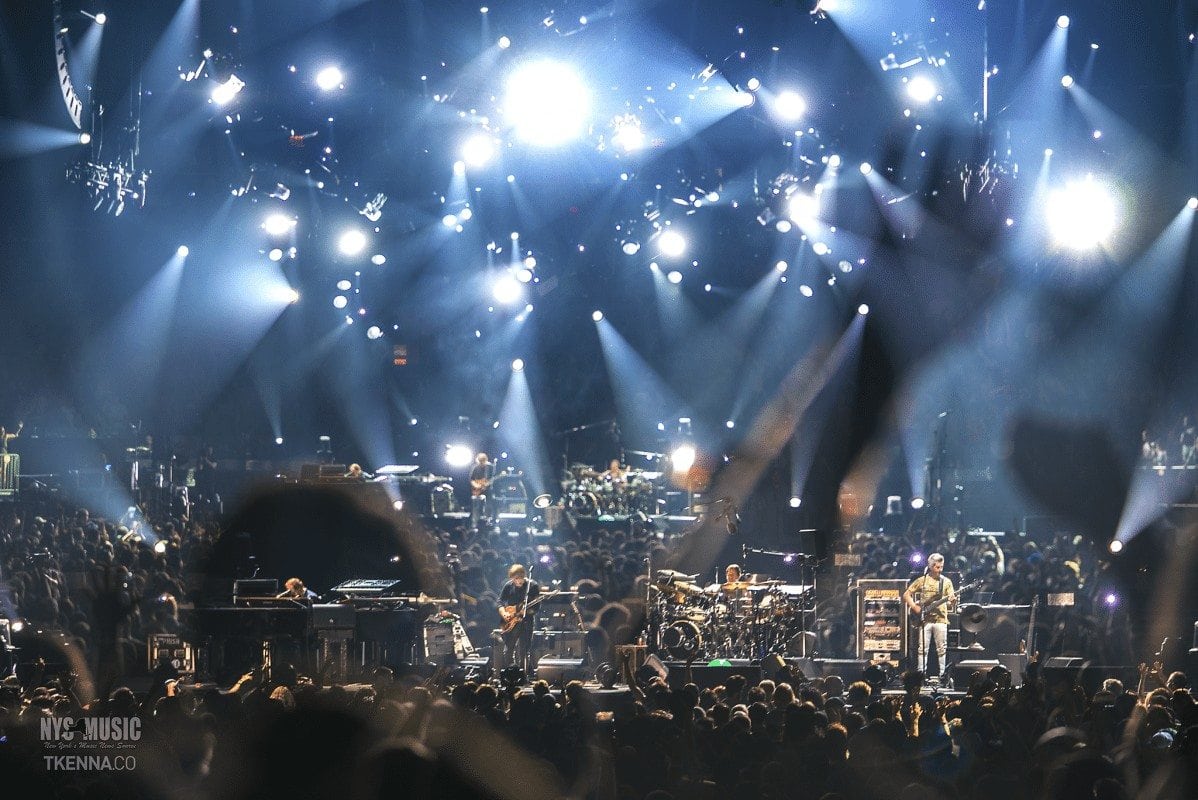 Unlike the outrageously raging Saturday night, the quartet took the “slow and steady wins the race” approach on Sunday.  The unexpected Junta jam “Esther” poked its head out for the first time since 2015.  A hush filled the chapel and the people looked happy as the boys eased into two more slower tunes in “Home” and “Brian and Robert.”  After a straight forward “Nellie Kane” Trey Anastasio led into an unforgettable “Colonel Forbin’s Ascent> Fly Famous Mockingbird” while Chris Kuroda took the lights on a legendary adventure in “the World’s Most Famous Arena.”

A spine tingling “David Bowie” finished off the set highlighted by Trey’s exceptionally tight guitar playing.  The first set may have been slow, but it certainly wasn’t dull as several bust outs and sought after trophies were obtained by the ravenous audience.  During the set-break, it was clear that fans had made the right choice in buying tickets to the Garden rather than staying home to catch up on Game of Thrones.

While there was no mention of “Jimmies” in the set two opener, “Drowned,” there was certainly enough improvisation to write home about.  Clearly the MSG residency has done something to the Vermonters as they are playing with a Nectar’s-esque level of commitment.  The ambient and mind-altering “Song I Heard The Ocean Sing” that swam its way out of the “Drowned” jam was the perfect addition to an already stellar second set.  Dialed in, Page anchored the jam with some incredible synth play and Gordon acted as the lift-guard and threw in a floating bass line to build the jam up. After two songs and almost 40 minutes, the crowd was left speechless, but thankfully Phish did all the talking during what will be known as the “Baker’s Harpua.”  The never-ending tale of Jimmy and his cat’s unfortunate fate has not been narrated since 1997 at the Garden, but this time around Trey, Mike, Page, and Jon sat down to tell us a story about the universe.  Donuts have covered mid-town Manhattan as fans anxiously await the details of the next flavor each night.  During the historic version of “Harpua,” Phish let us in on a little secret by informing us all that the entire Universe is just a donut!  In the expansive narration of Jimmy and his comrades, Trey consistently made the connection between current events and what is happening in Jimmy’s world.  The insanely entertaining story that was told on Sunday night will not just go down as one of the greatest things to happen during the 13-show run, but possibly one of the best renditions in Phishtory.

The band made it clear that they were not ready to head back down to planet Earth as they remained in outer-space for a cosmic “Also Sprach Zarathustra.”  The crowd seemed perplexed and were still trying to wrap their minds around the “Harpua” story when the spacey and instrumental jam morphed into a familiar and grounding “Golgi Apparatus.”  While I am not at liberty to assume how Trey writes his set lists, I imagine there was some thinking behind the second set on Sunday night.  The band went from a water and ocean theme to explaining the massive and mysterious universe before looking into a microscope and focusing in on one of the smallest elements of a cell, the Golgi body.

Under the light, they couldn’t get anything wrong on this particular night as they settled on yet another a cappella song, “In The Good Old Summer Time” to finish off the amazing set.  Phish acted as our genie and granted us the third wish of the night by debuting the Jimi Hendrix classic “The Wind Cried Mary.”  While die-hard fans were hoping to hear the recognizable “Izabella” by Jimi, we got a slow and fitting “best-of Hendrix” tune instead.  The Garden screamed Mary as smoke billowed and couples embraced during the well-executed cover.  The “Jimmies” night of the Baker’s Dozen run was a huge success and solidified the second Sunday as another classic Garden performance for the band that knows it best.