Protect Your Hearing: Earplugs and the Live Music Experience

In the fall of 2010, I became acutely aware of a ringing and slight pain in my ears. I ignored it yet it persisted the next few days as well. Over the next week, the ringing faded to non-existence, but a week later at a club show, I found myself taking pictures near a speaker and later that night, I felt the ringing come back, quite strongly. The ringing this time did not go away and I continued to see live music but kept away from speakers. In December of that year I contacted an ear/nose/throat specialist and he informed me that I likely had tinnitus, the constant ringing sensation in my ears that would not go away, and was noticeable, especially in the silence before I went to sleep each night. Earplugs were in order. This is when I decided it was time to invest in a good pair of ear plugs. For nearly every show since December 2010, I have worn earplugs and not missed a note of music and as a result, the ringing has subsided somewhat. While I have a couple of pairs of ear plugs that work well, I continue to notice, more than four years later that many of my friends and regulars at shows do not wear earplugs. The typical response is because they didn’t want to miss the sound of the show. The benefits of earplugs cannot be understated, as they filter out some of the unnecessary noise and improve the quality of the live music experience rather than hamper it. Around the time of this diagnosis, I sought out different styles and brands of earplugs to test which ones worked best and to share the benefit of earplugs with others so that fewer do not succumb to tinnitus, or worse, hearing loss. Four years later and I still have tinnitus but my hearing is no worse than it was in late 2010, but it would be a different story without a small investment in earplugs. For parents who wish to bring their children to concerts and live music events, hearing protection is of paramount concern, as younger ears are more easily susceptible to damage. Doctors advise choosing to protect  children’s hearing especially, noting “Had I not been educated as to how fragile a child’s hearing was, I may have not protected both my kids early enough to ensure they won’t have hearing loss. Now, they wear them to fireworks, music, anything loud. My son even has them on right now while doing his homework in his bedroom.” For parents looking into hearing protection for their children, a variety of earmuffs are compared here.

However, musicians are in a precarious position, especially bands that are just starting out, because they are faced with three choices – earplugs (affordable), in ear monitors (expensive) or no hearing protection at all (expensive in the long run). Each musician is different, where in ear monitors work for one, earplugs work for another. In the case of some musicians, needing to hear the subtleties of every note played is necessary and can be an issue when playing on stage, but still carry the side effects of being subjected to loud decibel levels of music for hours at a time, both in practice and during a performance. The dilemna for musicians is real. I spoke with Dr. Michael Devito, an ENT specialist, or Otolaryngologist, practicing in the Capital District of New York regarding hearing protection, the benefits of earplugs and what can happen without proper hearing protection.

“Tinnitus is a subjective noise that some people describe as a motor running, a high pitch, etc…, but because it is subjective, there is no real objective way to solve it, and thus, treatment is difficult. It was originally thought Tinnitus came from the ear cells in your inner ear as they get floppy and move around, which gives a neural impulse to the brain and the sound is then interpreted as a ringing. However, instead it may originate in the auditory cortex of the brain.”

Dr. Devito notes that the hazards associated with lack of hearing protection are quite severe.

“If it is continuing to ring for a month, then the ringing might not go away at that point. Hearing loss is the other concern for protracted, long-term noise exposure. Depending on the music, artists and your proximity to the speakers, the sound can greatly impact you. The more decibels, the worse it can be on unprotected ears.”

With that in mind, let’s talk ear plug basics:

When looking at earplugs, the most important thing to look for on a package or website is the Mean Attenuation.  This refers to how many decibels (dB) the hearing protection will reduce the sound, or how much the sound will be dampened based on quality of hearing product. If a given earplug gives you 20 db of attenuation, it will make 100 dB sound like 80 dB, without lessening the sound.

Make sure to insert all earplugs properly. This is done by putting your left arm behind your back and pulling your right outer ear backwards from the lobe. Gently insert the earplug with a light twist with your left hand. Repeat with the opposite hand for the other ear. This is sometimes called the ‘monkey grip’ (per KillNoise). Do not over-insert into the ear, only to the point where you can remove them successfully.

Keep earplugs in a case (most of those sampled below come with cases) and gently wash with soap and water – earplugs do need to be cleaned from time to time. If you use disposable ear plugs you can wipe them off, but they don’t need to be washed since they are designed for single use.

Of the brands surveyed below, none of these will fall out or feel like they might slip, provided they are properly inserted. Dance, rock out, rage proper and the earplugs will stay securely in your ear.

Matrix Orange (single use), made by HowardLeight.com. This pair is firmer and may be tough to get into your ear but once in, they do not dull the music much and it feels almost the same as not having them in. Ear Peace: These are the smallest pair sampled for this article and very light. They can hide in your ears so well that no one can see them at all and it can feel like you are seeing a show without earplugs inserted. Being so small, they can be a bit weird to remove, as there is a tiny rubber end that allows you to pull the entire plug out at once. Removal becomes easier the more you use them. Bonus – these come with an awesome case on a small key chain. One size fits all. HEAROS High Fidelity for small ear canals: It’s not the size of your ear canal that matter – get what feels best and fits best. These earplugs can be angled at three depths, denoted by soft ridges on the plugs. Comes with a case Etymotic High-definition Earplugs: This pair of earplugs comes with a cord that attaches the two earplugs together, so that you can put them in and take them out and let them hang around your neck when the music isn’t playing. They fit in nicely, much like the HEAROS mentioned above (Etymotic also makes HEAROS) and keep the static out evenly without lessening the music experience. 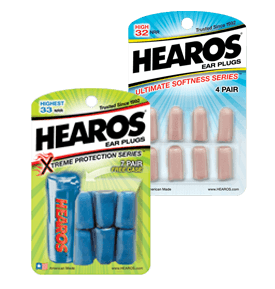 HEAROS Xtreme Protection: Made out of soft squishy foam, these make music easier to tolerate close up, without making it quieter; they simply take away the bass and static that you wouldn’t recognize otherwise. When away from the music, it can be difficult to hear so you may have to take them out and reinsert them. They also roll up nicely, fit tight and are soft to touch. No case, but they fit easily into a wallet or purse. Kill Noise: Developed in Sweden, these small rubbery earplugs fit in easily with four depth levels and a rubber disc to stop them from going in too far. They definitely kill the noise, but only the bad stuff; the music gets through cleanly and clearly. It may take a few tries to get them in right, since they are a bit flexible and could have more rigidity but once they are in, they fit just right. They come with flat a snap-shut case.

Keep a pair in your backpack for a festival, your glovebox for club and theater shows, and a pair in your purse or wallet – cover all your bases. Don’t see live music without them if you want to continue hearing live music for many years to come. Taking care of your hearing is the most important thing live music fans should do for themselves, to ensure that the music never stops.

Love it loud, but not to the point where you have to shout it out loud.

What Venues should look for in a Production Crew

The Case for a Federal Department of Arts and Culture